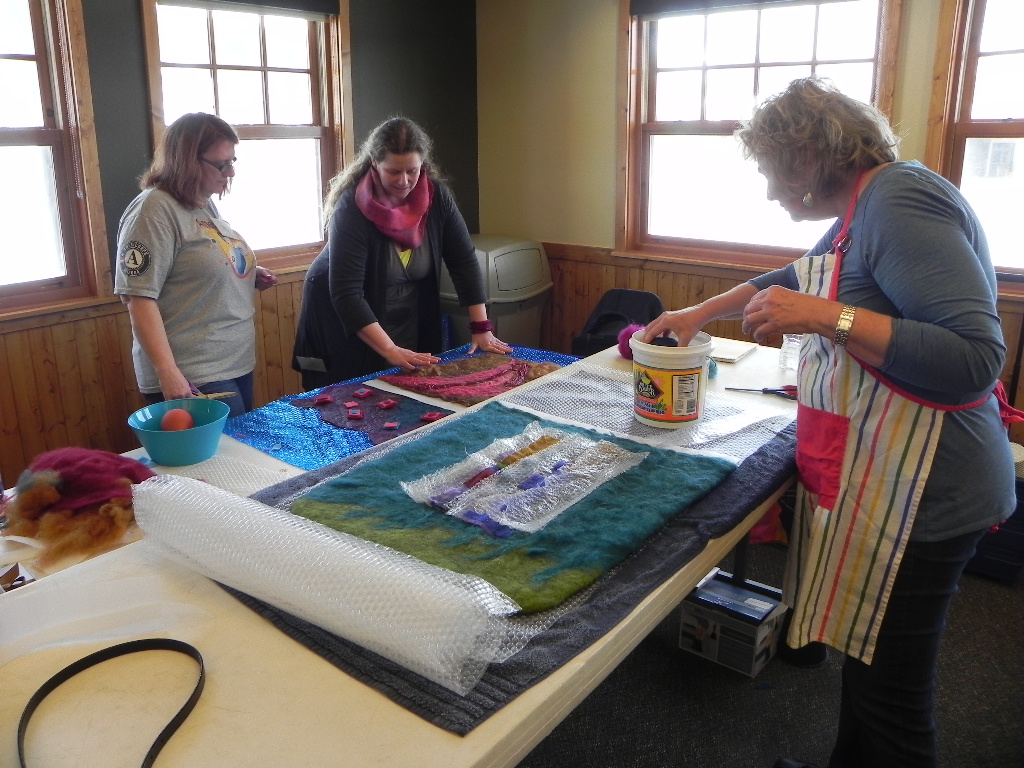 A favorite Hemingway quote has hung on the wall of my office for many, many years. It resonates with me in so many different situations:

To paraphrase, he said, when a bad thing ends, the time you spent on it fills up on its own; when a good thing ends, you have to search to find something to fill the void it leaves behind.

I am searching for something to fill my Felter's Rendezvous void.

The energy and laughter of all those wonderful people who were part of the event make me smile as I think back. We came together for just over four days and shared felting techniques and showed one another the felt items we'd made; we talked about felt and made felt. We learned from the instructors and from one another; we modeled felted clothing we had made and oooh -ed and ahhh-ed over one another's creations--we checked out the seams and turned things inside out to inspect the methods of construction. There is something magical about that to a felter. As with so many pursuits, you probably have to be one to understand.

The second Felter's Rendezvous took place in early March. I like being part of the long history of felting and shared with the participants during the Show and Tell evening my take on why we were there together that night.

My friend, Audrey Benedict, having taken a local felt making class from Mary Morse, gave five of her friends a group felting lesson as a gift. Afterward, we bought the raw materials and worked on felting projects individually and in groups of two or three over the next year or so. One October three of us took the jaunt to the Taos Wool Festival in New Mexico and our friend Fran Enright stayed on to take a felting workshop after the Festival. That was the turning point. Fran came back telling us about the wonderful group of women she had met in the class and about a local felting group that got together to make felt once a month. "They take classes," Fran said, "that's what they do: they take classes in different felting techniques." Once we knew this, we were hooked and began looking for and taking classes and workshops all over the country.

Not all that many felting instructors came to Colorado, but when they did, the classes filled to the point of overflowing and left us hungry for more. The Rendezvous was born of this need to create closer to home, to bring instructors here. The Rendezvous has also attracted felt makers from across the country. We hope to keep the event rolling and growing and to pass along the spark to new felters who come to realize that "they take classes; that's what they do!"