This non-woven cloth, made of animal fibers, is said to predate woven fabric.

Felt is a non-woven cloth made from animal fibers that have been pressed and matted together without stitching or weaving. Felt making involves a relatively simple process and techniques have evolved throughout the centuries from functional day-to-day purposes to a modern and beautiful art form.

Today’s basic techniques have been used since before the 6th century B.C. Some of the oldest pieces of felt have been found in tombs and burial grounds in Siberia, Scandinavia, and Germany. Theory holds that cold climatic conditions of these areas helped preserve the fibers through time.

Each mammal hair consists of a shaft covered by a series of protein scales. When fiber is wet, it softens and droops, essentially opening the scales. In the process of agitation such as rolling, rubbing, or tossing, scales of one fiber become entangled with the scales of another. Eventually the fibers are so entangled that the fibers form a dense fabric mat. There is a magic that happens as loose fibers transform into a firm and solid piece.

Legends and myths abound about the discovery of felt. Most historians believe that nomadic peoples originated the techniques in Asia. Wherever its origin, it is clear that felt was, and is, an integral part of the lives of nomadic tribes in Asia and the Middle East. Felt was an essential element for shelter, clothing, hats, saddles, rugs, and other daily necessities. Beyond utilitarian purposes, decorative felt was used for religious and ceremonial purposes.

The practices of the historic nomads are continued in the traditions of Mongolian yurts to the beautiful felted rugs found in Middle Eastern and Central Asian markets. The Scandinavian countries and throughout Eastern Europe everyday functional clothing and footwear has evolved from historical necessity to exquisite high fashion and extraordinary art pieces. The possibilities for this versatile medium are only restricted by the imagination.

Modern feltmaking utilizes almost the same techniques that have been used for the last 8,000 years. It is a simple process that uses very little equipment and simple techniques.

For thousands of years humans have turned fleece into warm clothing and other utilitarian objects. Looms and spinning wheels symbolize these fiber-related skills but the art of felt making dates back even farther.

Sign up here and get a a terrific .pdf on how to make a nuno scarf. 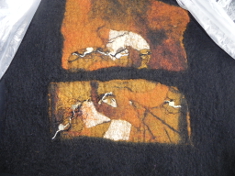 Lifelong learning
When I took my first class in felt making I thought that was it. Now that I knew how to make felt; I knew felting. How wrong I was! Had I been...
Read More